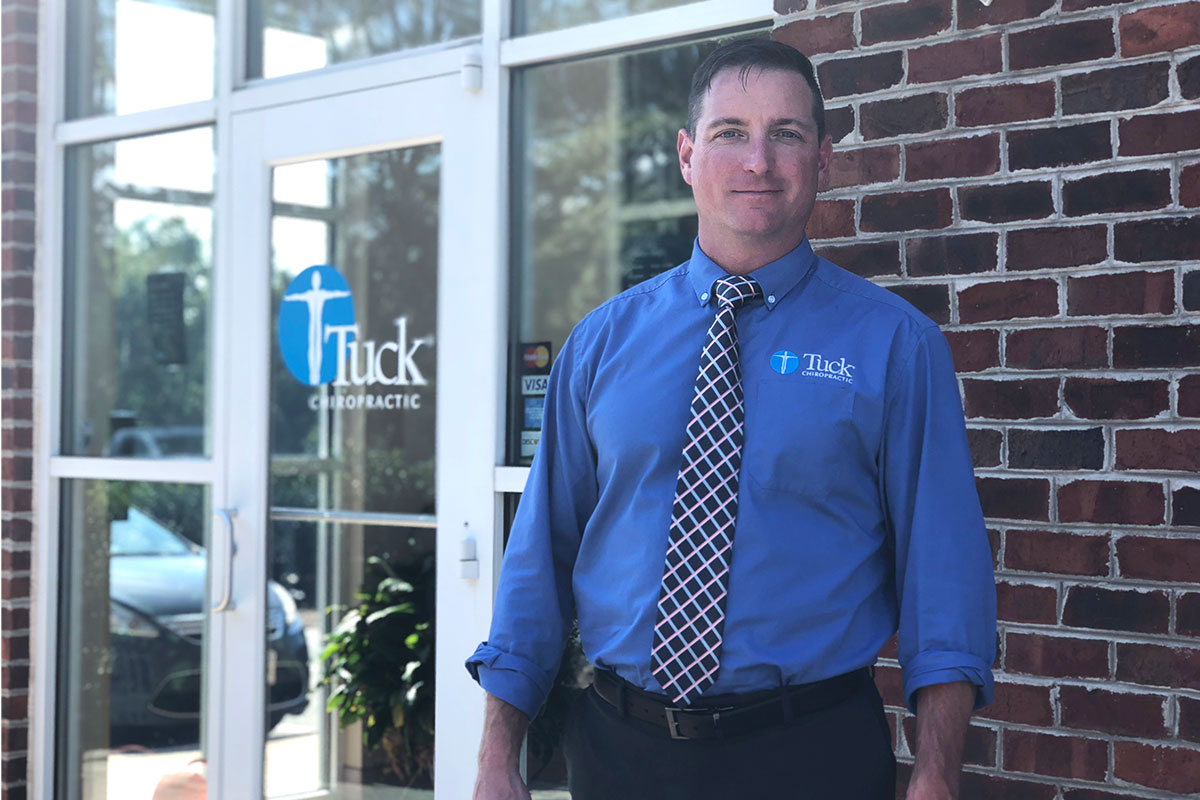 Bedford County in Southwest Virginia has a lot of rolling hills, a lot of farms, and a lot of hard-working people. Dr. John Earsing has been living in the area for over 20 years and has been dedicated to working hard to make a positive impact on anyone who gives him the opportunity. He has practiced in Bedford since 2001 and loves the people and community that make Bedford County “Home” for him.
“We deal with patients who have experience with chiropractic care, patients who have never been and have questions, and patients who have been everywhere else and finally come to us as a last resort,” says Dr. Earsing.
His journey as a chiropractor started when he was a teen. As a college student at the age of 19, John knew he wanted to work in the medical field and as exploring his options. He was volunteering at a hospital and helping to administer physical therapy when he got into a car accident. Suddenly, he became a patient himself. They couldn’t find any distinct injuries on the X-rays after his crash and while physical therapy helped some, he was still having trouble recovering from the impact.
“I couldn’t even look down to tie my shoes,” says Dr. Earsing. “The medication they gave me wasn’t helping me get my job done so after much thought, I decided to go to the New York Chiropractic College outpatient Clinic for a second opinion.”
After an examination, diagnosis and several visits to the clinic, he found the route he wanted to pursue in his own health care career. Seeing his own progress and the way his neck and spine were able to heal naturally, without the help of medication was astounding and inspiring to him. Once he completed his undergraduate degree, he applied to the very chiropractic college that had helped him to heal.
Fast-forward to 18 years later, and Dr. John is helping people conquer their pain one adjustment at a time. After practicing on his own for fourteen years, he merged his practice with Tuck Chiropractic Clinic in Bedford in 2014 and found a great community of doctors to collaborate with as he worked on streamlining his ability to help patients feel better.
“It’s the best thing ever!” he says. “Now, I have 14 other doctors that I can work with. The staff is amazing. It really provides me with the best opportunity to give patients the best care.”
One part of his job that he especially enjoys is turning skeptics into believers and helping the hopeless find relief. When people come in after trying all of the other routes, they often feel like they can never find relief. After just a few adjustments, he finds it incredibly rewarding to see their progress and surprise.
He also gets a thrill out of helping people who are skeptical that chiropractic is the right route for them. For example, in one of his most recent success stories, an aerobics instructor found that she couldn’t straighten her leg past 90 degrees due to damage to her knee. After tirelessly seeking help from an orthopedist and physical therapist, nothing was working. After a few weeks of working with Dr. Earsing and the staff at Tuck Clinic, she hit a milestone. With the help of electrical muscle stimulation, adjustments, and myofascial work, she was able to finally straighten her leg and get back to doing what she loves! While most don’t normally think of chiropractors as a solution for joint and extremities pain, it can be an effective solution.
“If it’s something that we can work on, we will,” says Dr. John. “I findi t enjoyable when people come in saying ‘I don’t think this is a chiropractic problem but my shoulder, knee, or ankle hurts.'”
At the end of the day, all of the doctors at Tuck Clinic see it as their purpose in life to make people feel better, to improve lives, and to help people find relief when they thought there was nothing that could be done.
“I picked something that I could do forever and never get tired of it.” says Dr. John.
And we are thankful for that! If you believe chiropractic can help you with your pain, schedule your first appointment today.